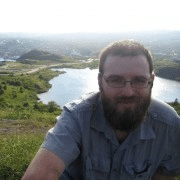 Matthew Beaudoin received a Ph.D. in Anthropology from Western University in 2013 and is currently the Manager of Archaeological Assessments at Timmins Martelle Heritage Consultants Inc. (TMHC) in London. Matthew’s research directly compared 19th-century Mohawk and Irish domestic sites in Ontario to explore the assumptions archaeologists make when they assign an ethnic identity to a site. This builds upon Matthew’s earlier research conducted with the Labrador Métis during the completion of his MA at Memorial University in 2008. During his archaeological career, Matthew has conducted extensive field research and artifact analysis on pre- and post-contact sites from Labrador and Ontario. In addition, Matthew has also conducted ethnographic projects in Labrador. Since joining TMHC in 2008, Matthew has been involved with several notable projects, such as the archaeological assessment of Stoney Point/Camp Ipperwash and the Elgin County Courthouse. Dr. Beaudoin has also taught the Field Methods Course and Principals of Archaeology courses as a part-time faculty member at Western University. Dr. Beaudoin is an active member of the Canadian Archaeological Association, the Ontario Archaeological Association, the Society for American Archaeology, and the Society for Historical Archaeology.